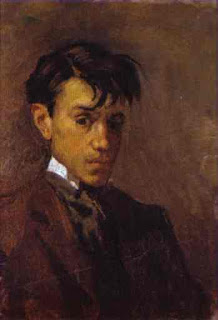 Before becoming a proud parent of the cubist movement, Pablo Picasso was a classically trained artist who knew exactly where noses and eyes were supposed to go (as evidenced in his 1896 self-portrait to the right.)

One could argue that had he not previously displayed mastery of his craft before attempting his later work, Pablo Picasso not only wouldn’t have succeeded in shifting the paradigms of the art milieu of his day, he might have been locked away. Or worse – ignored.

What’s more, one can argue that Picasso couldn’t have created his later works without first thoroughly understanding the fundamental principles needed to paint that self-portrait. Brush technique, color, depth, lighting, shadow, perspective, and proportion are only a few of the elements he used to express his stationary stories, realist or otherwise.

Painting, writing, furniture making, and cooking for example, all require a great deal of skill and understanding which we call craft. The scribe’s analogs to the painter’s skills are language, character, dialogue, action, pacing, structure, etc. Guiding these skills are simple rules learned over time through observation, education, and trial and error.

Without fully internalizing the rules governing the most rudimentary stories, a novice writer attempting to write a masterpiece would be as likely to do so as the proverbial chimp at the typewriter hammering out a draft of Hamlet—

There are exceptions of course – the rare savant, the Mozart, the intuitive wunderkind who crawls out of the womb and taps out a masterpiece over a long weekend. But they’re one in ten million, and their careers are often as ephemeral as a Hollywood marriage.

When I was 12 years old my father bought me a banjo. I took lessons for about two months, and like many kids, I became frustrated with scales and chords and all the rules you have to learn in order to actually play music. Long story short, I decided that instead of learning the banjo I would invent my own instrument.

So like a young Thomas Edison I set about deconstructing my brand new banjo. And after only a few days of blood, sweat, and tears I had created -- a useless pile of strings and tuning knobs. Why did I think I could invent a new instrument when I didn’t understand the first thing about the one I had?

When a head chef is hiring a new cook, he’ll often test the skill of the applicant with an omelet. It may look simple, but cooking an omelet perfectly each time takes a lot of craft, and that can only be attained through experience.

"Do not try to go beyond where you haven’t yet begun.” The Book of Runes
Posted by David at 8:20 AM